The East Sea is the third addition to Platinum Beers’ core range. The East Sea is a highly-drinkable dry-hopped summer brew customized for easy drinking in Vietnam’s intense tropical heat.

Since it was first released in 2017, Platinum’s East Sea has built-up a favorable reputation as one of the most **accessible and sessionable** in Vietnam.

Platinum’s Beers’ concept for the East Sea is to create a refreshing, sessionable craft beer that’s low in alcohol and perfectly suited for Vietnam’s sweltering summer season. Although the local drinking culture often calls for putting ice in your lager to avoid drinking warm beer, the East Sea maintains an invigorating taste that is not negatively affected by weather conditions.

An initial abundance of **hoppy aromas** including fresh grapefruit is followed by a healthy dose of spices. The East Sea’s herbal mouthfeel is matched by a long-lasting finish categorized by “grassy” notes alongside orange zest.

The summer ale from Platinum Beer’s pours pale straw in color with moderate haziness beneath a soft, fluffy white head. Despite its light color, the body is light-medium. The end-result is a craft beer with a wide range of beautiful aromas and flavors.

Platinum Beers’ explained that “grassy” flavor profiles are a result of adding a specific kind of hop to the recipe. There is a wide range of hop profiles, some of which are reminiscent of plant-like material and even tropical fruits.

The interaction between the hops and malts may also be responsible for flavors reminiscent of plant material. Another important point is that most craft beers labeled as “grassy” have been dry-hopped.

To the unfamiliar, dry-hopping is part of the brewing process where the hops are placed into the cellar tank, in addition to the hops previously added in the brew kettle during the boil.

Platinum Brewed And Hung is a venue that reflects an intimate “taphouse experience” with the widest selection of Platinum craft beers under one roof.

As its name suggests, Gon And Nhe – Food & Beer is all about craft beer and light beer bites. The craft beer menu is loaded with local brews from Platinum Beers’ including the Golden, Pale Ale, and East Sea Summer. From soul food to local Vietnamese specialty items, and surf and turf, Gon & Nhe provides an authentic craft beer experience in Ho Chi Minh City.

BiaCraft Artisan Ales has the largest selection of craft beer in Vietnam. This also includes their own line of craft beer. Their impressive drink menu is focused on local breweries, although they recently partnered up with American breweries like Stone Brewing, Anderson Valley, and Founders. For some of the freshest East Sea Summer around, head to the District 3 location.

Platinum Beers “Head of “Hoperations” **Mark Comerton** encourages pairing their new brew with ceviche or any variety of spicy or grilled seafood.

Aside from seafood, Comerton highly recommends heading to their taphouse, Brewed And Hung for an ultimate barbecue and craft beer pairing. “One of my favorites is the East Sea alongside our Argentinian-style grilled quail,” he smiles. 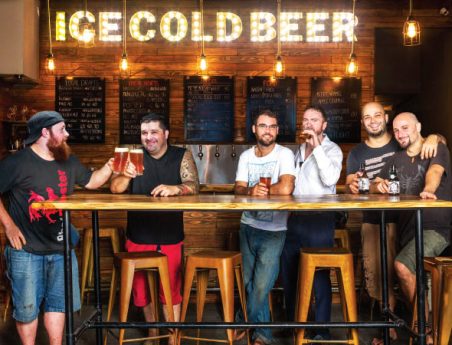 Craft Beer In Vietnam: The Evolution Of A Craft Revolution